Invocation of rain by appeasing the Lord

Gajan or Shiv Gajan is an important festival rather an imperative part of the lives of people in the Rarh  region of Bengal. This area being an agricultural belt every festival or celebration is associated with cultivation. The agriculture of the region is dependent on rainfall which is erratic.  In order to appease the gods and goddesses of rain, people offer songs and dance in traditional festivities.

During the summer months which spans across April, May, June there is hardly any rainfall.  The festival of Shiv Gajan takes place in these dry summer months to invoke rain. Shiv Gajan involves a number of rituals, some very painful ones like piercing of the tongue, piercing one’s body with arrows. All this is done to please Lord Shiva[1] and to receive his blessings in the form of rainfall. There is a belief among the people that the annual rainfall and harvest depends on Shiva’s blessings. Gajan begins on the last day of the month of Chaitra (from mid March to mid April) and continues till the months of Jaistha (mid May to mid June). Fairs are held in different villages on the occasion of Gajan.

The occasion of Gajan involves innumerable ways of celebrations through customs like fasting, tying a Shiva follower to high held spinning pole, applying turmeric and oil on the body and staying awake till dawn. These customs are followed by the communities collectively in common spaces and this is where Chau comes in as an important component. Chau has a sacred as well as entertainment element here. The Natua’s dance of expressing courage, stories of Lord Shiva and Durga, repeated sommersaults all these come together to form today’s Chau. 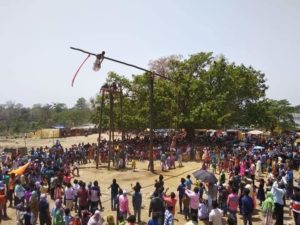 The Chau Palas performed generally entail stories of Lord Shiva.  Chau is an inseparable part of Gajan. Throughout the month of Chaitra Chau rehearsals continue in full swing but without the

ornate costumes and masks. Practicing and performing in the scorching heat of summer is also another way of showing toughness and restrain to please Shiva.  The final performance takes place on the day before the Bengali New Year in the fairs of Charak. All the groups try to perform their best Pala on this day as there is huge competition and every group wants to prove their mettle. Competition is not limited to dance only but music, song, production, costume; mask is also compared among the groups. These performances are night long; performing throughout the night wearing heavy masks is another way of inflicting pain on oneself to please the Lord.

Historically Chau began with solo performances also known as Ekaira Chau or Ostadi Chau and then came group performances also known as Mel Chau. Implementation of the stories from the epics like Ramayana and Mahabharata known as Pala Chau came much later. The Shaiva tradition of Chau comprises characters like Shiva, Durga, Ganesha and Kartikeya which are inseparable characters of Chau.

Rituals emerge out of folk traditions and local beliefs. People in arid part of Eastern India believe in the spiritual and supernatural phenomenon related to Shiva. One such story of the supernatural power of Lord Shiva goes around among the Chau artists which is why Karthik Singh Mura, son of late Gombhir Singh Mura (1930–2002) a Padmashree Awardee performs Chau dance along with his group during Gajan at Lahariya Temple, Purulia. 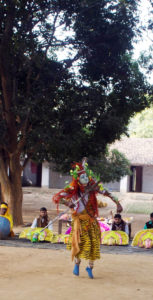 An artist performs dance of Shiva

Once due to stomach infection Gombhir Singh Murah was extremely sick. No medication could provide him relief. To seek help he took refuge in the Lahariya Baba Temple. Leaving his work and dance he continued with his protest. Lack of earning members in the family led to acute financial crisis. His better half Chintamoni Devi supported the family with her minor income that she earned by selling logs and woods in the local market of Baghmundi. After two months Lahariya Baba appeared and gave Gombhir Singh the remedy for his distress.
Besides being a guru in Chau Gombhir Singh Murah was also a good hunter. He used to often hunt animals like rabbit, wild boar, different birds. He was a very competent archer. But he promised to quit hunting and perform in the temple of Lahariya Baba each year during Gajan.

After his recovery from his chronic illness Gombhir Singh Mura kept his promise and started performing in Gajan. This gave him fame and the art form flourished. Meanwhile the stories of Gombhir Singh and Lahariya Temple spread and people started believing Lahariya Baba’s blessings to be the reason for his fame. Many other troupes also began to perform in the Gajan celebration because of the same belief. In recent days renowned groups like group of Padmasree Gombhir Singh Murah, Padma Shri Nepal Mahato, Baghambar Singh, Hemsingh Mahato, Jaladhar Kumar perform in the temple of Lahariya Baba.

Shiv Gajan and Chau have a close knit relation because of the folk lore and folk traditions. The participants of Gajan are called Bhakta or Bhagata which means disciple. They are also regarded as ‘Gajan Sanyasi’. They bring out long, colouful rallies during Gajan carrying a flag which remains placed in the performance area throughout the time span of the ritual.

Chau Dance is found in the states of Bengal, Jharkhand and Odisha and has three different region specific names for it-Purulia Chau, Seraikela Chau and Mayurbhanj Chau. And interestingly Gajan plays an important role all these forms of Chau. 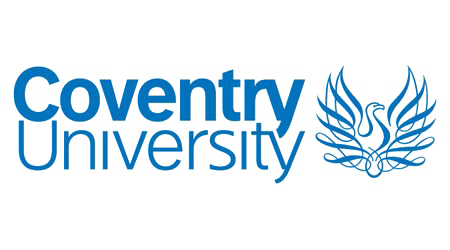 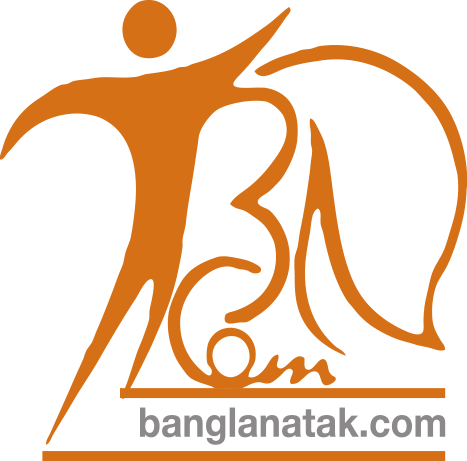